A Cancer Survivor's Journey Back To Good Health
by Stephanie Hedgepath

In 1996, I heard the words that no one wants to hear: I was diagnosed with colon cancer. There is no history of cancer in my family. The symptoms were few and I was hit suddenly with debilitating pain. Due to the swift action of my physicians, I was in the hospital within a week for surgery. The prayer chains were active and I had Christians all over the world praying for me. The surgery proved more challenging than expected and I was given a rather grim prognosis. After radiation therapy I began a year of chemo treatments. My family physician was concerned that I do all I could to boost my immunity and recommended that I start taking an adaptogen supplement. Dr. Martin (my physician) had done extensive research on the subject and was convinced that this was something that I should begin. The only place I could get it at the time was at the local health food store. It was difficult to obtain as they always seemed to be out of it. It was also expensive! But I persisted in taking it - when I could get it.

Over the next 16 years, I had increasing difficulties with my intestinal tract. In early 2008, I had recurring urinary tract infections. Dr. Martin sent me to a urologist when he could not clear up the symptoms of the UTI, even after there was no evidence of infection remaining. The urologist determined that my small intestines had adhered to the bladder through the mesh sling used in my initial cancer surgery. In April, 2008, they determined I had to have more surgery to correct the adhesion. A second surgery was neccessary several weeks later. Again, my prayer cover was extensive and though the surgery proved to be even more involved than they first thought, I came through extremely well and had very little pain post-op. After a week-long stay in the hospital I came home. I give the glory to God for my cure and know it is due to the prayers of my brothers and sisters in Christ that kept me from being consumed by the cancer in my body in 1996 or sucumbing to the abcess and peritonitis in 2008.

My surgeon remarked to my husband that they rarely saw someone as sick as I was, at my age (61) coming in for such serious surgery be in such good health! My blood work numbers were all excellent and my general state of health rather remarkable, especially considering that I not only was suffering from adhesions of the small intestines to my bladder (the original purpose of the surgery), but that those intestines had formed multiple adhesions to each other and also had multiple perforations that were leaking fecal matter into my abdominal area resulting in a spreading abscess. These perforations were caused by a deteriorating mesh sling used in the original surgery 14 years ago to keep my intestines out of the radiation area. Due to the surgery, I now have an ultra sensitive intestinal tract. I find it difficult to eat much roughage and have to have a low fiber diet. Stress makes it worse. I was quite concerned about not getting the proper nutrients and worried about travel and judging dogs with such little energy and stamina. We had taken this same adaptogen product until recently, when they changed the formula.

My family physician, introduced me to other great, supplements that supply many of the micronutrients, vitamins and minerals needed by the body for good health. I love them - they taste great and give me focus and energy when I need it - and they are GOOD for me!

My husband, Jim, has also become an enthusiastic user of good supplements also. Six years ago he was badly out of shape from sitting at a desk all day and his hamstring muscles in his legs had tightened to the point that he could not get out of a chair or a car without pulling himself up with his arms; kneeling was also quite painful. His shoulder muscles had atrophied so badly that when he tried to lift some wall board to do some home repairs, he tore the rotator cuff in his shoulder. After 6 months of physical therapy he was beginning to get in shape but his endurance was poor. We went on a trip to Virginia and Jim decided to do a short 1 mile hike in the mountains up to Humpback Rock. He had to stop and rest every few hundred yards. Since he enjoyed hiking, he began to exercise, eat right, and has recently added healthy energy drinks to his diet. 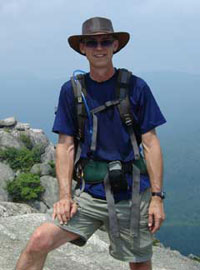 Jim now takes healthy energy drinks, on the trail with him. He is now a very active hiker and backpacker and likes the strenuous wilderness hikes and climbing to mountain tops. At 59 years old, he rides motocross and wants to climb every mountain he sees. At his age, he seems to be speeding up rather than slowing down. He now says he wants to hike the entire Appalachian trail - 2150 miles. The photo to the right is on top of Old Rag Mountain in Virginia last Summer. Jim and I believe that good diet, exercise and the right supplements play an essential role in good health and endurance. I look forward to hiking the mountains again with him later this year.

A Personal Note From Jim:

Stephanie and I have come a long way in improving our health by changing our diet and adding exercise to our daily routine. I now use a healthy energy drink on the trail. Many energy drinks are mostly sugar and caffeine which are not good for you. Choose your energy drink wisely. The photo at the left is me on top of preaching rock on the Appalachian trail where I met a homeless man who lives on the trail. He was an agnostic but on that day I shared my faith in Jesus as we sat and talked while I cooked lunch and enjoyed what God had made all around me.

Our Bible tells us that as believers our bodies are temples of the Holy Spirit 1Cr 6:19 and 1Cr 3:17 says "If any man defile the temple of God, him shall God destroy; for the temple of God is holy, which [temple] ye are." Romans 12:1 says "present your bodies a living sacrifice, holy, acceptable unto God".

My reading about health issues taught me that the vast majority of free radicals that exist in your body at any given moment can be traced back to environmental toxins, such as industrial pollutants, household chemicals, cigarette smoke, plus physical stressors, such as unhealthy oils, food preservatives, and the wide variety of chemicals that are found in almost all highly refined foods, the chlorinated water we drink and emotional stress. I learned how antioxidants can counteract the damage free radicals do to the body and the proper supplemental products give us the vitamins and antioxidants we need to aid us in that battle. Jesus Christ is the great healer and he has provided so much in nature that is good for us. Do your research and choose well.

Back to our Needlework site